The base-card design is simple, but flawless. Full-player images are printed on a thick card-stock and the monotone background really makes the player photography pop. But where the product really stands out is with the hits. This product gained immediate acclaim when Topps created the metal-framed cards a few of years ago. Adding a gold-ink veteran autograph to a gold-framed card results in something more akin to an heirloom than a collectible “trading card.”

Although I didn’t pull a gold framed auto in this box, I pulled one last year in the baseball product. Here is a small gallery to show you what I’m talking about with this set. They truly look like they belong in a museum.

But the framed-autograph cards aren’t the only hits to be excited about in Museum Collection. There are a variety of beautiful designs within this set, something that is hard for a company to pull off without making a product seem convoluted or confused. Topps maintains a consistent “feel” throughout all the insert sets and parallels and succeeds in making this feel like one really deep, well thought out product. Take a look at some of the parallels from my box:

Rather than diluting the beautiful product with ridiculous designs, the parallels remain true to the base design, as do the on-card rookie autographs. The patch cards take elements from some of the most popular RPAs in the hobby and combine them in a classy way. Minimal foil-work, quality card-stock, great player photography, and sick patches. It’s easy to see why collectors flock to this product.

But perhaps my favorite insert in this entire product is the “Canvas Collection” set. Topps introduced this concept back in 2008 with their “Masterpiece” Football set. Museum Collection seems to be the modern interpretation of this highly-collected set, and they elevated the concept by including actual one-of-a-kind original sketches in the product. Although I didn’t pull the 1/1, even the reprints (like this Dan Marino I pulled) are popular among collectors. 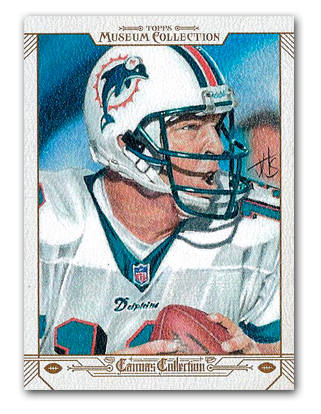 This is another perfect example of a set Topps could market as artwork. Honestly, if Topps sold full-sized canvas prints of cards like these, I would decorate my office with them. Even if they cost the price of an entire box of cards or more.

We are constantly on the forums and can’t help but see what collectors think about every new release. Topps Museum Collection may be the least-complained-about product I’ve ever seen…and that’s saying something.

Overall: This product isn’t cheap, but you get what you pay for. If you are a re-seller and want the most bang for your buck, there are MANY veteran autos (see the framed examples above) that sell for good money. However, if you are a collector that actually enjoys sports-cards (and isn’t overly concerned about resale value,) this is a can’t miss. I have never felt disappointed after busting a box of Museum Collection in either baseball or football. Highly recommend everybody tries a box of this, especially at the reduced price point now that 2015 products are around the corner.

March Madness, BABY! It feels like the tournament just began yesterday, but here we are on the precipice of the Championship game between Duke and Wisconsin. This year’s tournament has been chock-full of big-time shots, controversial calls, incredible comebacks, and huge upsets, which is par for the course for what many consider to be the greatest event in American sports.

We wanted to celebrate the biggest tournament of the year with our biggest giveaway of the year, so we enlisted the help of our friends at Upper Deck, BCW, and Blowout Cards. The prizes they donated will make you want to climb a ladder and cut down a net, regardless of how your team did in the tourney.

As we mentioned in our original post, we are giving away four prizes:

There were almost 200 entries into this competition, so the four of you who win should be very proud of how stupid-a** lucky you got on your bracket

Just kidding…we know you were probably up for many nights studying metrics and doing analysis on your favorite teams, right? However you got there, the following three winners have already been determined:

Thanks for making it easy on us by not having any ties. We will know who wins the Championship later tonight, and I will update this post. We have several brackets that are neck-and-neck so we are excited to see how the brackets shape up.

Huge thanks to everyone who participated and a special thanks to our sponsors for donating the amazing prizes. We are packing out the prizes right now and will notify the winners of their prizes as soon as they are ready to go.

Winners: Please email SCAcontests@gmail.com and tell us which part of the tournament you won in the “subject” line. Within the body of your email please include your name and mailing address.

Everyone: Please subscribe to our blog by adding your email address to the field at the top of this blog post, on the right sidebar. Blog subscribers typically have a better chance of winning giveaways since they are the first to know about contests/promotions. Also, if you haven’t looked into our PRO features yet, please do so and sign up! 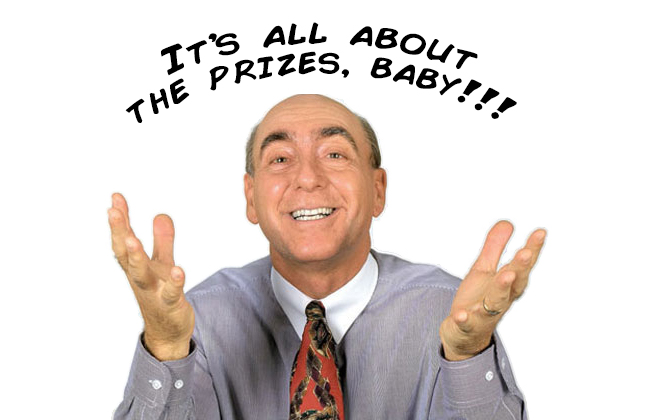 Topps Supreme is a different animal…it’s a beautiful and majestic animal, but it can really tease you. Unlike Museum Collection, which is an experience in every box, Supreme can be very “hit or miss” since you only get one hit per box. However, it’s only 1/3 the price of Museum Collection, so there is much less risk for a chance at just as big of a reward.

Back when Topps first came out with “Supreme Football” back in 2010, collectors initially gawked at the notion of a single pack per box without a guaranteed autograph. However, once group breakers started busting cases collectors saw just how incredible the autographs and hits were…I remember forking over big bucks for a dual auto of Joe Montana and Sam Bradford. This was also the first product to use a beautiful gold foil behind the sticker autographs…an elegant touch that brought sophistication to a design element most card-manufacturers tried to hide.

[Editor’s Note: I’m getting all nostalgic…if you are, too, check out my review of 2010 Topps Supreme Football here.]

Fast forward to today and not much has changed. The only big difference is that Topps now guarantees an autograph in each pack, which is a big deal. But other than that, the product still stands out as one of the best veteran products each year. 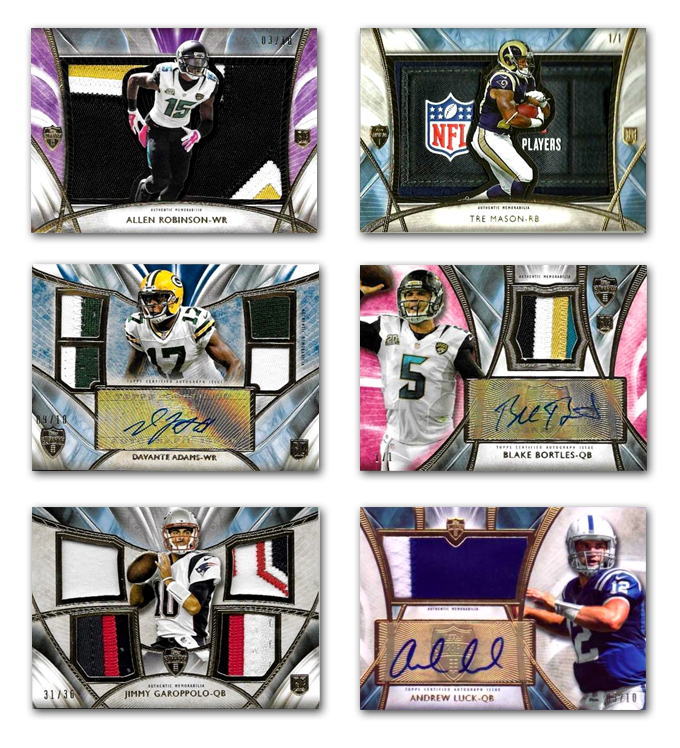 A couple of years ago Topps decided to bring booklets into the Supreme product. Instead of forcing them in, though, they brought some innovation in the form of hand-drawn plays, dual-veteran-game-used memorabilia, and the pairing of rookies with veterans. Rather than printing out thousands of them, each booklet in Supreme has a limited print run. Combine scarcity with sick designs and juicy patches and you’ve got a recipe for success. It’s no wonder why Supreme booklets have become some of the most popular within the hobby. 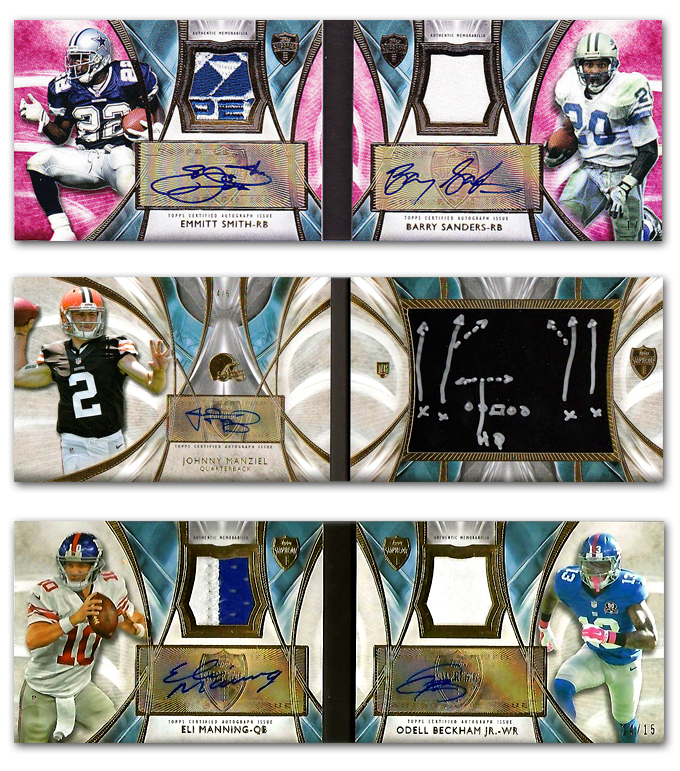 Like Museum Football, Supreme offers tremendous variety in the form of autographs, multi-player autos, single/dual/triple/quad patches, booklets, memorabilia autos and more. However, the feel of Supreme feels totally unique to Museum Collection or anything else. I believe the box-breakdown is a big reason for this…rather than being marketed as a “high-end” $200 box that not everybody can afford, Supreme comes in at $75 a box and gives everyone an opportunity to pull a high-end card from a box that’s priced below low-end hobby boxes.

The trade-off is obviously the fact that you only get 4 cards in a box, but if you’re searching for a BIG pull and are on a budget, Supreme is absolutely the best way to go. If you’ve got big bucks and can afford a case or two, it is rare to see a case of Supreme that doesn’t include at least one rookie or veteran monster. Personally, I’ve never hit it big with Supreme, but I blame the fact that I’ve only bought one box at a time. However, when 2015 comes around I plan on pre-ordering three boxes to see if it improves my chances.

Conclusion: Topps Supreme is only five years old, but it has already become a well-loved brand within the hobby. Innovative takes on the ubiquitous booklet cards and a healthy mix of HOF veteran autographs make this product special. The ridiculously low price-point for a product with such high-value cards makes this a “must buy.” You might strike out, but for only $70 it’s a risk I’m willing to take…and if you get a bit lucky, you won’t be pulling singles. This baby has been hitting home runs since it came out in 2010. Don’t believe me? Check out this gallery from 2010 Supreme then scroll back up and take a look at how it’s evolved over four years.